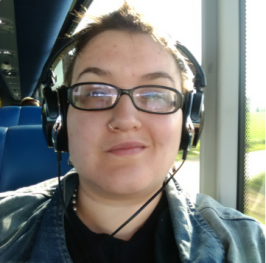 Hello! I’m Sarah, just a cute roly-poly coding dinosaur who makes games. I used to be known around the internet as Jiyambi.

I’m originally from the USA, but moved to Scotland to study for an MSc in Computer Games Technology from the University of Abertay.  After that, I worked for a few years at Ninja Kiwi Europe as a programmer. Now, I make my own games, and also teach people cool stuff.

I’ve had a colourful journey into the world of game development, with forays into the fields of performing arts, chemical engineering, education, and information technology. I love bringing these diverse experiences into my work.

I work with the small indie team Bounder Games, where I serve as producer and programmer. We work with Unity C# on multiple platforms including mobile, PC, and XBox One. We’ve released two games and are currently working on a third: Armoured Engines, a shoot-em-up meets tower defense in the weird wild west.

As an educator, I lecture at Fife College on various subjects related to games and game programming. I am also working on several educational programming books, covering programming in C++ with SFML and in C# using the Unity game engine.

Want to chat about game dev, education, or other cool stuff? Connect with me on Twitter @CodingDino, or by email at sarah@codingdino.com.